The other day I was jogging along the switchbacks of the dirt road that winds through the forest of Tzfat, up along the northern side of the mountain, when I came upon a man walking his dog. It was a large white dog, not on a leash. The man was on one side of the road, his dog on the other. It crossed my mind not to run between them, but I’m comfortable with dogs, so why not? In a flash, with a growl and fangs bared, the dog leaped. He bit through my clothing and just grazed the skin of my leg. He lunged again, but I batted him away, the owner shouted, and the dog backed off. Apologizing profusely, the owner started disciplining his pet. I also apologized, saying I should not have run between – the dog was just protecting him. The owner said “even so, the dog has to learn.” We all have to learn – like why did I not listen to that thought that crossed my mind?

In this week’s parashah, Bnei Yisrael complain about their lives in the wilderness, showing ungratefulness for the heavenly gift of Manna that sustains them, and are attacked by poisonous snakes. The people ask Moshe to pray to HaShem to get rid of the snakes. HaShem advises Moshe to make a model of a serpent and place it on a pole “and whoever is bitten should look at it and live.” Moshe complies:

And Moshe made a copper snake and placed it on a pole, and it was, if a snake bit a person, and he looked at the copper snake, he would live.

The Mishnah Rosh HaShanah, dealing with the issue of kavanah, focused intent in the performance of mitzvot, asks pointedly:

Is it the snake that kills or the snake that revives? Rather, when Israel gazes above and they submit their hearts to their Father in Heaven, they are healed, and if not, they waste away.

We can ask, though, if the model of the snake doesn’t kill or revive and it’s all dependent on focusing our attention on HaShem, then why have the model at all? Is it an aid to kavanah in some way – for instance, that lifting the snake up on the pole is intended to literally lift the people’s vision? Why should a physical symbol be necessary in the first place if everything depends on kavanah? The Torah is extremely sensitive to the danger of idolatry. It would seem that for HaShem to command making a metal sculpture of a snake to help cure snakebite would be a spiritually edgy thing to do. Ultimately the copper serpent does become an idolatrous object during the First Temple period: the common people offered incense to it, thinking it had curative powers in itself, so the good king Hizkiyahu destroys it (2 Kings 18:4).

The Ramban addresses these questions. Among his many skills, he was also a physician. He explains that the copper serpent was not intended to be an aid to kavanah — quite the contrary! Therapeutically, if a person is bitten by a rabid animal, the worst thing for that person is to think of the animal or see the animal that bit him — it causes the person to obsess with the trauma and spiral down into worse illness. Yet HaShem commands making a model of a serpent and Moshe makes it as realistic as possible. The Ramban suggests that a certain venomous snake of the area has red eyes and a reddish coloration, so Moshe makes it in copper. The point is to magnify the miracle and the lesson: that even in the face of an image of the very creature that bit them, which is the worst thing to see and remember, if they focus their hearts to their Father in Heaven, they will be healed.

Rabbi Menachem Recanati, in his supercommentary on the Ramban, takes the lesson in another direction. The point of facing an image of the snake is to get Bnei Yisrael to face the traumatic moment of being bitten and analyze the sin that led up to it. By taking responsibility for their sin through a process of self-accounting and self-judgment, together with all the qualities of divine revelation, including love and compassion, they are able to attain a cathartic healing. The copper snake on the pole was an assist to the therapeutic process as a kind of vaccine or activation immunotherapy, as a challenge that intensified the crisis, requiring the person to marshal their deepest personal resources to face it, deal with its root causes, and overcome it. This approach sounds reasonable, yet in cases of severe crises in life, we sometimes feel we just don’t have the inner spiritual strength ourselves to overcome them. Can a psychological process, however deep, really cure a lethal snakebite?

At the center of Tzfat stands a monument to the Davidka. It was a homemade mortar that was instrumental in the victory of the Yiftach Brigade of the Palmach in the battle for Tzfat on May 9 and 10, 1948. The Jewish defenders were far outnumbered and hopelessly under-equipped. They had this mortar, poorly designed, wildly inaccurate and essentially useless as a serious weapon. But it was very loud. Desperate, having already been pushed back in the first engagement, not knowing if it would accomplish anything, they fired off a few rounds of the Davidka. It was enough to frighten the Arab army into thinking they were being attacked by a large and powerful force, and they fled. It’s a fitting symbol of the town. Even when you feel overwhelmed, and you are overwhelmed, you just try, and sometimes, somehow, it works.

I once had to have some minor surgery in the States. These are the days of patient autonomy, so an appointment was scheduled for me to meet with the surgeon to talk about the upcoming procedure and give my informed consent. He seemed like the stereotypical cultural image of a surgeon – confident, aloof, even faintly arrogant. In under a minute he explained the procedure and it was obvious that it was routine and not much to talk about. He asked if I had any further questions. I said, “well, as long as we have a few more minutes, can I ask you how you feel about being a surgeon, do you regard it as a spiritual calling?” He got very serious and said, quietly and sincerely: “I’m just a tailor. I cut tissue and sew it back together. But it’s God who makes it such that capillary connects to capillary and cell to cell and tissue grows back together and heals. It’s a miracle, and I am aware of this every day.”

The spiritual power of this Land is not some pretentious and pretended easy-going vibe. It’s a stark clarity and purity that challenges us to rise to our highest selves and demands our full attention and full engagement, learning lessons from every person, every experience and every encounter, even with an overprotective dog. And underneath it all is something miraculous that supports us and brings us together and helps us rise beyond ourselves and beyond what we thought possible. 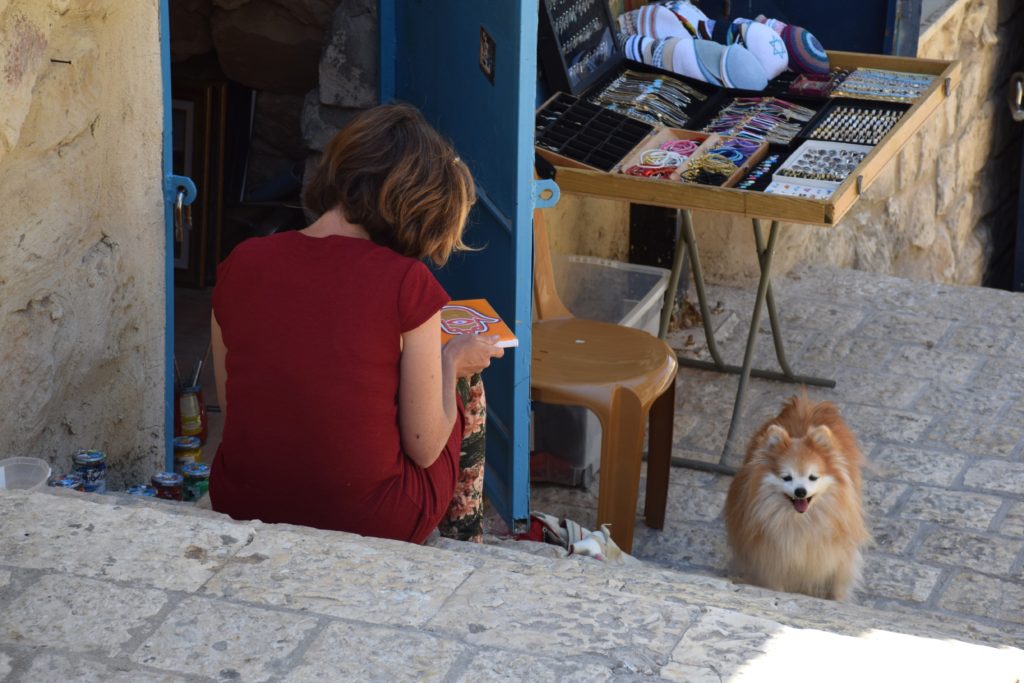 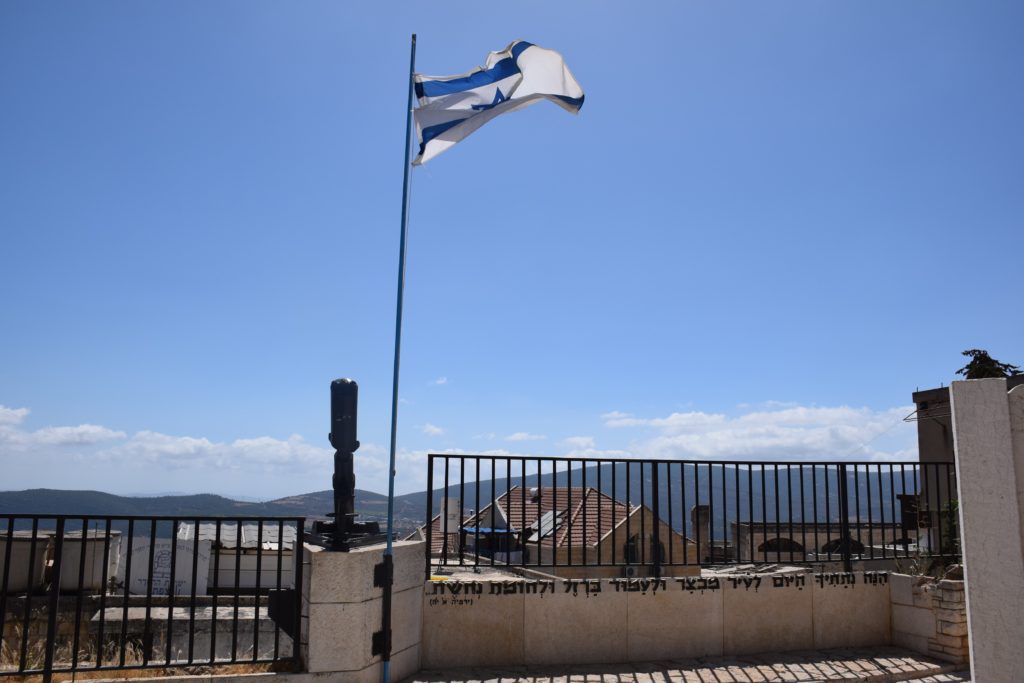 “I make you this day A fortified city, And an iron pillar, And bronze walls ” Jeremiah 1: 18 At the Davidka Monument in Tzfat 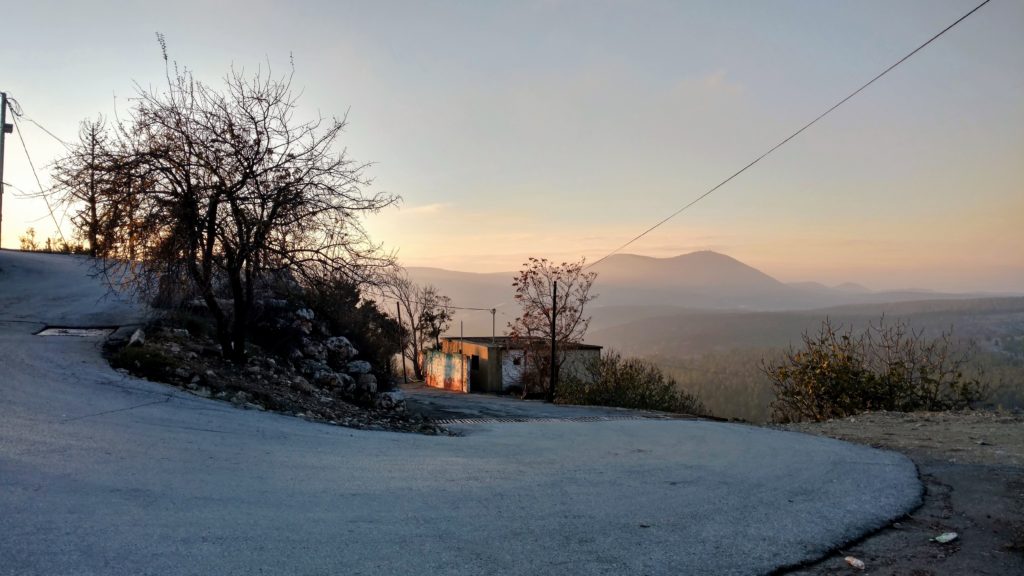 Looking towards Mt. Meron from the running path