Over the last weeks the fire kite and balloon arson from Gaza has intensified and become a significant problem for the surrounding Israeli communities, with thousands of acres of farmland destroyed. This tactic uses the West wind, the usual wind of our region that blows in from the sea, to send incendiary devices into Israel. Israel has yet to come up with an effective deterrent for this eco-terrorism – the rare biblical East wind that God used against Egypt would be helpful right about now. The Palestinians of Gaza, indoctrinated with a toxic ideology, are clever enough when it comes to destroying things –  to create something positive and function as a mature and responsible society, not so much. But the Middle East has always been the most dangerous and violent neighborhood in the world, and Am Yisrael, with HaShem’s help, has been dealing with the challenges of our fractious neighbors for millennia.

In this week’s parashah, ten of the twelve spies sent to reconnoiter the Land of Israel before the nation enters bring back a discouraging report that the tribes living there are powerful and hostile. Only two of the spies, Yehoshua and Kalev, stand up courageously and try to rally the people to realize God is empowering them to return to their Land and will help them deal with any and all challenges. The generation that had been brought out of Egypt, experienced the splitting of the sea, the revelation at Sinai, and many more miracles, lose their nerve when it comes to taking up their divinely directed mission to settle the Land of Israel and bring a new model of ethical and spiritual nationhood to the world. As a result they are doomed to die off in the desert over the next thirty-eight years, and only their children will get the opportunity to enter the Land. But HaShem promises that, of that original generation, the steadfast Yehoshua and Kalev will get to enter and inherit their portions in the Land of Israel:

In this wilderness your corpses shall fall, all your troops and all your number from the age of twenty and above, who complained about Me. Lest you come into the Land in which I raised My Hand in oath to settle you, except for Kalev ben Yefuneh and Yehoshua bin Nun.

And My servant Kalev, since he has another spirit in him and follows Me fully, I will bring him to the Land that he came to and his offspring will inherit it.

Kalev has “an other spirit,” a combination of courage, humility and faithfulness. Rashi notes that HaShem is promising Kalev that he will inherit the region of Hevron, the place in the Land of Israel that he alone of all the spies “came to,” to pray at the graves of the patriarchs and matriarchs for divine help before continuing with his mission.

Forty-five years later, after the generation of the Exodus dies in the wilderness and the next generation enters the Land of Israel and conquers most of it, there is a moving reunion between Kalev and Yehoshua, the two old battle-weary veterans, recounted in the Book of Yehoshua, as the Land is being divided up and the tribes and their families are being given their inheritances.

The tribe of Yehudah approached Yehoshua in Gilgal and Kalev ben Yefuneh the Kenizi said to him “you know the word HaShem spoke to Moshe, the man of God, regarding me and regarding you at Kadesh Barnea… And Moshe swore that day saying the Land that your legs trod shall be for you an inheritance for you and your children to this day, for you have been full in following HaShem my God. And now, behold, God has sustained me in life as He said, these forty-five years, from the time God said this to Moshe as Israel walked in the wilderness, and now I am today eighty-five years old. I am still today as strong as I was on the day Moshe sent me, my power then is as my power now, for war and to go forth and come back. So now, grant me this mountain that HaShem spoke of on that day, for you heard on that day, and there are giant people there and the cities are fortified – perhaps HaShem will empower me and I will drive them out as HaShem said. And Yehoshua blessed him and gave Hevron to Kalev ben Yefuneh as an inheritance. Therefore Hevron became the inheritance of Kalev ben Yefuneh to this day, since he followed HaShem God of Israel fully.

Kalev, head of the tribe of Yehudah, is approaching Yehoshua towards the end of Israel’s campaign to conquer the Land of Israel from the warring Canaanite tribes. Hevron, on a mountainous plateau at an altitude higher than Jerusalem, even higher than Tzfat, has not yet been fully subdued. Even though he had been promised the area of Hevron as his inheritance, in recognition of his faithfulness to God, Kalev doesn’t take it for granted and assume entitlement. He asks only for permission to work to conquer it. Even his invocation of divine assistance is phrased with humility. Rabbi Moshe Alsheikh, the great commentator of Tzfat, flags the unusual phrase used: אולי יקוק אותי . Most commentators read it “perhaps HaShem will be with me.” But Rabbi Alsheikh notes that such a reading is missing the anomalous phrasing and makes Kalev the principal agent and God secondary. He says that a more accurate reading is as an ellipsis, that Kalev is making himself the secondary object and hoping that God, the primary subject, will give him strength to accomplish this task. A rough rendering would be “perhaps God will empower me.” He knows, and has always known, that God is running the show.

Some of Kalev’s “other spirit” continued to inspire events in more recent times. In the Six Day War in 1967, the image of Rabbi Shlomo Goren, army chaplain and general, blowing the shofar at the Western Wall with the troops who had just recaptured the Old City of Jerusalem is well known. But this was not the end of the war. The next big push was to recapture Hevron from the Jordanian legion. Rabbi Goren wanted to be with the troops for that as well. He and his jeep driver raced from Jerusalem down to the Gush to catch up with the IDF forces that were preparing to attack Hevron the next morning. He gave them a pep talk, and before he lay down to catch a few hours sleep he asked some of the soldiers to wake him when they got up to leave for battle.

But when he woke up a few hours later the soldiers had already left. He roused his jeep driver and they raced south to Hevron to catch up with the troops, assuming the battle was already on. As they drove into Hevron they were the only vehicle on the streets. There were white flags of surrender hanging from windows and rooftops. There were no Israeli soldiers in sight and they assumed the battle was over and the city conquered. But in fact, unknown to them, the IDF was still setting up for attack, carefully surrounding the city.

Rabbi Goren directed his driver to the Cave of the Patriarchs and Matriarchs, Ma’arat HaMachpelah, the holiest site in Hevron and one of the holiest in Israel, where Kalev had gone to pray. The doors were locked. Rabbi Goren shot at them with his Uzi, but that didn’t work. So his driver backed his jeep up and attached chains to the doors and pulled them open. Rabbi Goren entered the Machpelah, blew the shofar, placed a Torah scroll there, and began to pray.

The Mufti of Hebron sent a messenger to ask Rabbi Goren to accept his surrender. He refused, and sent back the message, ”this place, the Tomb of Machpelah, is a place of prayer and peace. Surrender someplace else.” Rabbi Goren and his jeep driver had conquered Hevron by themselves, without arrogance or entitlement: the spirit of Kalev ben Yefunah.

And the spirit of Kalev is still with us. The People of Israel have always had a different spirit from the rest of the world. We are surrounded by bad actors and hectored and harassed by hypocrites who excuse and enable their violence. With HaShem’s help we may find a solution to the latest form of terrorism coming from Gaza, and stand up to the challenges of Iran and Hizballah. Because HaShem is running the show, and our mission, which we pursue with both courage and a realistic humility, is to create a nation that will be a model for this suffering world, a nation guided by Torah and its principles of justice, compassion and peace.

The maqluba flipping ceremony at the Eucalyptus Restaurant in Jerusalem http://www.eluna.com/Rest/Eucalyptus.asp 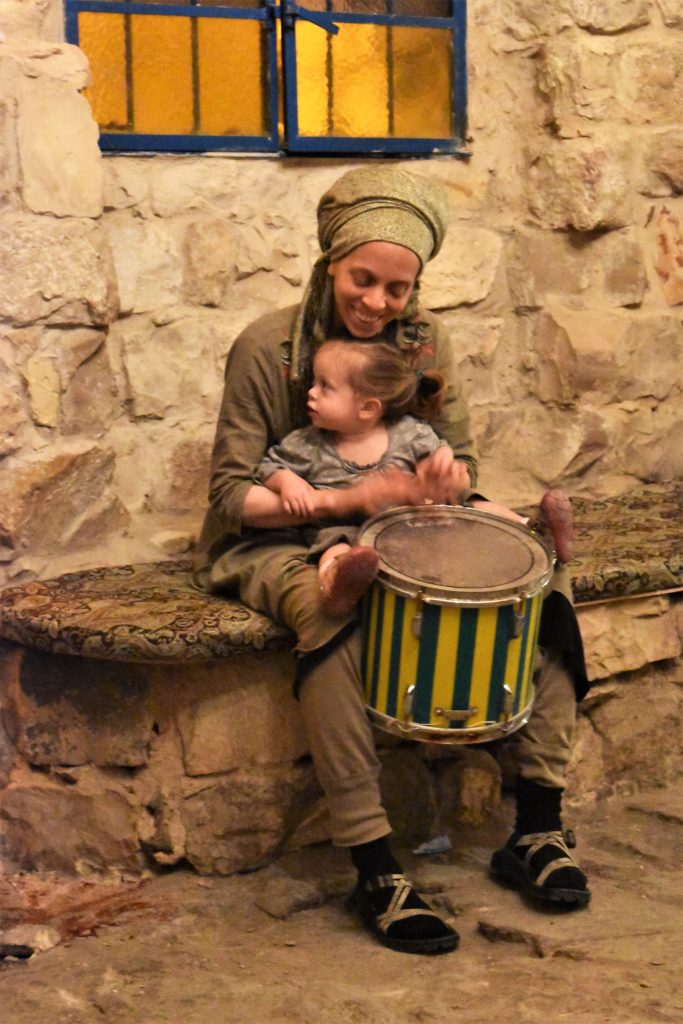