The recent storm system that blew through Israel dropped 53cm (21 inches) of fresh snow on already snow-capped Mount Hermon. We have a view of the mountain from our home and it’s a majestic and uplifting sight. 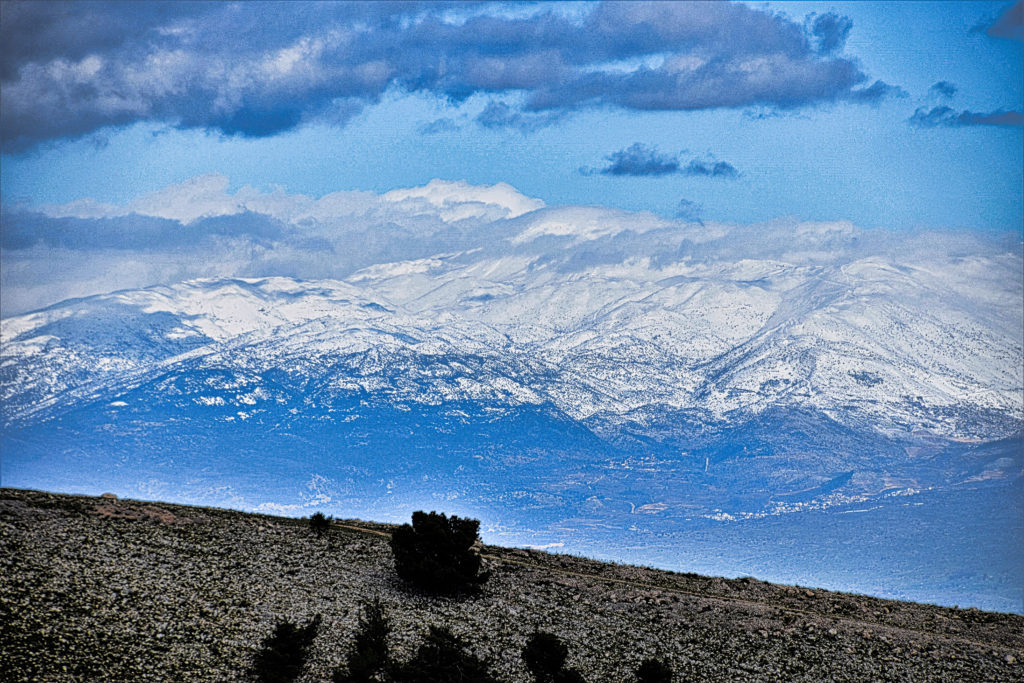 The storm also raised the water level of the Kinneret significantly, though it still has a long way to go before the level is considered safe. Though the recent stormy weather has been hard on tourists – we see them trudging through the wet streets and alleys of Tzfat bundled against the rain and wind and cold and trying to make the best of it – it’s been bringing much-needed water to the region. In the Gemara Yuma 53b Rav Acha son of Rava says in the name of Rav Yehudah that the prayer of the Kohen Gadol on Yom Kippur, that he says when he leaves the Holy of Holies safely and successfully, includes the request:

May the prayers of travelers not enter Your Presence.

Travelers are always praying for sunny days – but the locals need the stormy weather.

This week’s parashah also features stormy weather. The revelation of Torah at Mount Sinai is accompanied by thunder and lightning and thick cloud. Similarly, when Eliyahu HaNavi arrives at Mount Sinai to complain about the challenges of his prophetic mission, HaShem’s revelation to him occurs in the context of a storm. When HaShem appears to Job it’s from the midst of a storm. Ezekiel’s vivid prophetic vision of the structure of Heaven, the inner structure of reality, featuring the angelic Chariot and the Throne of Glory, is also preceded by a storm. The Midrash Mekhilta cites other passages in Tanakh that state that the revelation of HaShem is accompanied by storm:

So, too, it says “the voice of HaShem is upon the waters, the God of glory thunders (Ps. 29)… the verse tells us that on the day of the giving of the Torah there were clouds and lightning and rainfall, and so, too, it says [in the Song of Devorah] “HaShem, when You came forth from Se’ir, when You stepped from the fields of Edom, the earth trembled and the heavens dripped, indeed the clouds dripped water, the mountains flowed before the Lord, this is Sinai, from before the Lord God of Israel (Judges 5:4) .” And it says “the voice of Your thunder is in Gilgal, the lightning lights up the world (Ps. 77:19)…”

Rabbi Moshe Alsheikh, the great Torah commentator of Tzfat, explains at length that the storm phenomena at Sinai signify the ripping of the screens that normally stand between Heaven and earth. The storm expresses the emanating power that removes all interference to facilitate the revelation of HaShem to Am Yisrael. It’s a meteorological metaphor as well as a reality. A storm with lightning, thunder and rain appears along a front formed when a low pressure system encounters a high pressure system. That’s a good account of what happens at Mount Sinai – the low pressure system of earth encounters the high pressure system of Heaven, and stormy weather appears along the interface.

Rabbi Yaakov Tzvi Mecklenberg in his commentary HaKetav vehaKabbalah wrestles with the implications of the Torah’s description of the revelation of Torah at Sinai as perceived by the Israelites directly through their senses – they heard and saw the thunder and lightning, they heard and saw the letters of the Ten Commandments. The heavenly Torah is not physical – how could it be perceived with physical senses? He refers us to Maimonides, Yesodei HaTorah 1:11,12, that HaShem and all heavenly phenomena associated with HaShem are beyond space and time, so biblical descriptions of heavenly phenomena in physical terms should be understood as a metaphorical code and translated consistently to abstract spiritual terms.

In his Guide of the Perplexed Maimonides explains that the whole point and process of the revelation of the heavenly Torah to earthly Israel was HaShem’s translation of the infinite, eternal truth of Torah into the terms of the physical, temporal world. The role of the prophet is to translate the pure, abstract prophetic message into concrete terms, into words and concepts that guide moral action and spiritual insight in this physical world (Guide 2:37).

At the end of the Guide of the Perplexed (3:53) Maimonides introduces three essential qualities that we usually understand ethically: love, righteousness and judgment. He is expounding a key verse from the prophet Jeremiah:

For in this one who praises should be praised: intuit and know Me, that I am HaShem, doing love, judgment and righteousness in the earth, for these I desire, says HaShem.

Maimonides notes that these three terms are used to describe God’s action in the world, but on God’s level these qualities need to be translated into terms appropriate to the eternally infinite. Love in God’s terms is not an emotion, it is unlimited, unconditional giving. Maimonides says “this reality as a whole, that He, may He be blessed, brings it into being, is love.” Maimonides does not say God created the world and then loves it. This world, this reality IS God’s love. Each of us is not just loved by God. We are God’s love translated into space and time. Righteousness, Tzedakah, from Tzedek, justice, in God’s terms means giving each being its due in the deepest and most comprehensive way. When we act with comprehensive compassion in principle, we translate God’s righteousness into the world. Judgment is knowing when to be giving and when to set limits for the greater good of all. When we exercise judgment in a comprehensive way that considers all conditions in truth, we translate God’s judgment to earthly terms (Guide, 3:53).

At the very end of the Guide of the Perplexed, Maimonides sums up the entire message of the book:

The perfection of human being that may truly be praised is the one acquired by a person who has achieved, in measure corresponding to their capacity, apprehension of Him, may He be exalted, and who knows His providential care extending over His creatures as manifest in the act of bringing them into being and governing them. The way of life of such a person, after achieving this apprehension, will always have in view love, righteousness and judgment, through internalization of His actions, may He be exalted.

We are created in the image of God. But without true discipline of consciousness, intellect and heart we bumble around in the world with minds full of fantasies and inappropriate passions, and even with the guidance of Torah we may make mistakes applying its absolute love, righteousness and justice. The whole project of Maimonides’ great work, and life work, is to help us learn to think clearly about the reality of the world and think spiritually in truth, with as much true awareness of God as we can attain. With this awareness fully absorbed, we are empowered to act with true love, true righteousness, true justice, the whole Torah in truth, as true expressions of God in the earth. This is what the revelation of Torah to Israel at Sinai is about.

The stormy weather along the front between Heaven and earthly is this dynamic, energetic process of translating God’s wisdom and guidance to this world, the endlessly fruitful and creative mission of the Jewish people. 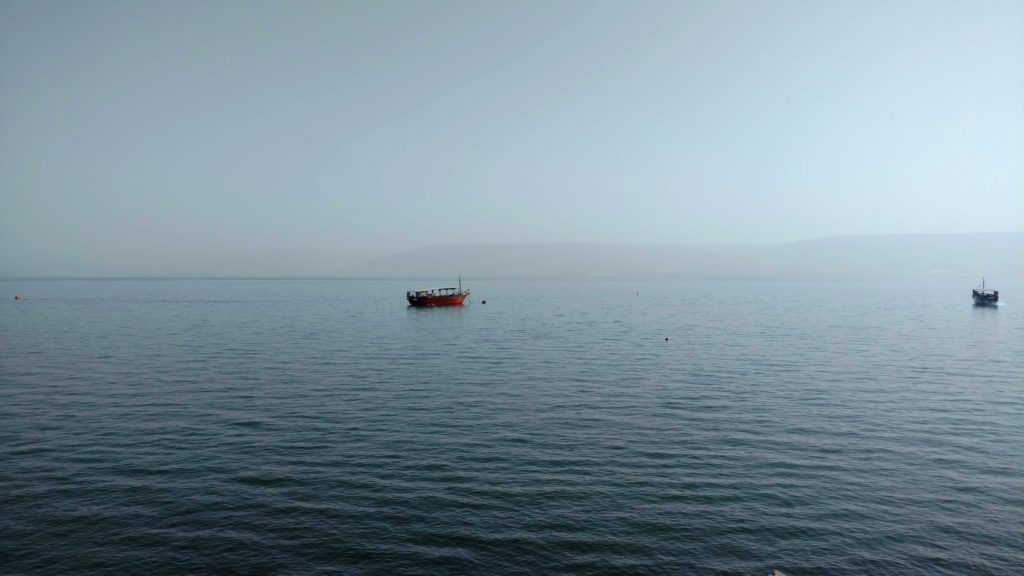 The peace of the Kinneret after the storm